Okay. So those who may not be a sports fan, the theme of this article is analogous to the game of football. More specifically, both collegiate and professional football. And -of course- one does not need be a football fan to know that  both collegiate and professional football (think NFL), are played during the 4th Quarter of the year.
Interestingly enough, the hour-long game is broken up into four, fifteen-minute, quarters. Most football games are won or lost in the 4th Quarter. Often times, the last two minutes of the fourth quarter are the most intense moments of the game, because time to play the game is running out. It is so important that after the game clock counts down to the last two minutes, the referees stop the game and announce the "2-Minute Warning!"

"In gridiron football, clock management is an aspect of game strategy that focuses on the game clock and/or play clock to achieve a desired result, typically near the end of a match" (cf. Clock Management, Wikipedia).

I have heard many people talk about "having a game plan" for some or all aspects of their life. That is all well and good, but only if you know how much time you have left to "play the game".
Another drawback to having a "game plan" is that life is not a game. Games are a form of entertainment -- a distraction from all the weights and measure of life. Granted, there are those who are considered winners, and those who are considered losers. Such a world-view / perspective is vanity (something about which one is vain or conceited). It is often the reason why, when meeting and getting to know someone, we might ask, "So, what do you do for a living?" We ask as a means to measure ourself against other people's (worldly) status in life.
Such concerns are "temporal" in nature.

Temporal -- definition;
1. Of, relating to, or limited by time: a temporal dimension; temporal and spatial boundaries.
2. Of or relating to the material world; worldly: the temporal possessions of the Church.
3. Lasting only for a time; not eternal; passing: our temporal existence.
SOURCE: The Free Dictionary

No one knows how long they have to live. We know and realize our time on earth is limited. Our response to that understanding has a major effect on the way we choose to live our life.
At some point in our life, we also become aware that we are created beings. We come to understand that without a creator, there is no meaning or purpose to our life (ineffectual; useless). We also come to realize that we are spiritual, as well as physical beings. Coming to these realizations can (and often do) result in more questions than answers.
For a myriad of reasons, such awareness of our limited lifespan and our being of two natures -- corporeal and spiritual -- will either enlighten us, or deprive us of a full and abundant life. For we are ruled by our emotions -- whether we care to admit it or not.
Coming to know and understand such things about life as a whole and individually, we are faced with either living in the reality of our existence, or living in denial. It would seem most logical to accept the reality(s) of  our limited, human existence, than to deny it and become a bitter morass of fear, frustration, and futility. The latter leading to a life of misery, sorrow, anger, and regret.
It makes absolutely no sense to me why some folks choose to live in denial. I tried it for nearly thirty years. At the end of those years I wished I had never been born. Some people - including myself - would describe that as a living hell.
Today, hope has replaced hopelessness. Love has conquered hate. I have ceased fighting everyone and everything. I threw in the towel and surrendered to THE ONE -- the ONLY ONE - who could turn my darkness into light and heal all the pain in my heart. My sorrow has been replaced with joy.
Why? Because my time was running out. I was in the fourth quarter of my life and I was tired of losing. I took stock of how I got to be where I was at, and made the decision to stop running headlong unto my (spiritual) death. Instead I ran to the only one who could not only give my life meaning and purpose, but showed me how to give light and life to others who are as lost and alone as I once was.

Amazing grace, how sweet the sound
that saved a wretch like me.
I once was lost, but now I'm found.
I was blind, but now I see.
-- John Newton 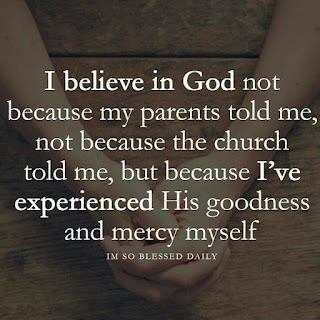