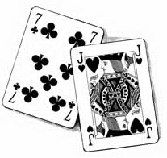 Inspiration from "The Greatest Generation"

During the North African Campaign, a bunch of soldier boys had been on a long hike and they arrived in a little town called Casino.

The next morning, being Sunday, several of the boys went to church.

A Sergeant commanded the boys in church, and after the Chaplain had read the prayer, the text was taken up next.

Those of the boys who had a Prayer Book took them out, but this one boy had only a deck of cards. So he spread them out.

The Sergeant saw the cards and said "Soldier, put away those cards."

After the services were over the soldier was taken prisoner and brought before the Provost Martial. The Marshall said, "Sergeant, why have you brought this man here?"

"For playing cards in church, Sir."

"And what have you to say for yourself, son?"

"Much, Sir" replied the soldier.

The Marshall said, "I hope so, for if not, I shall punish you more than any man was ever punished!"

The soldier said "Sir, I have been on the march for about six days, I have neither Bible nor Prayer Book, but I hope to satisfy you, Sir, with the purity of my intentions."

And with that the boy started his story....

"You see, Sir, when I look at the Ace, it reminds me that there is but one God.

The Deuce reminds me that the Bible is divided into two parts, the Old and the New Testaments.

When I see the Four, I think of the four evangelists who preached the gospel, Matthew, Mark, Luke and John.

When I see the Five, it reminds me of the five wise virgins who trimmed their lamps. There were 10 of them, five were wise and were saved, and five were foolish and were shutout.

When I see the Six, it reminds me that in six days God made this Heaven and Earth.

When I see the Seven, it reminds me that on the seventh day God rested from his work.

When I see the Eight, I think of the eight righteous persons God saved when he destroyed this earth. There was Noah, his wife, their sons and their wives.

When I see the Nine, I think of the lepers our Savior cleansed. Nine out of the ten didn't even thank him.

When I see the Ten, I think of The Ten Commandments God handed down to Moses on a table of stone.

When I see the King, it reminds me there is but one king of Heaven, God Almighty.

When I see the Queen, I think of the Blessed Virgin Mary, who is queen of Heaven.

The Jack, or Knave, is the devil."

There are fifty-two cards in a deck, the number of weeks in a year.

There are four suits in a deck, the number of weeks in a month.

There are twelve picture cards, the number of months in a year.

Then there are thirteen tricks, the number of weeks in a quarter."

"So, you see, Sir, my pack of cards serves me as a Bible, an almanac and a Prayer Book."

And friends, the story is true. I know; I was that soldier.

* The most requested song on "The Country Oldies Show" is "THE DECK OF CARDS" and it always generates a lot of letters and cards. Here's the information about it:

Deck of Cards was composed by T. Texas Tyler whose real name was David Luke Myrick, born 6/20/1916 in Mena, Arkansas. He died of cancer in 1972. He's best known as a singer, songwriter/guitarist and was nicknamed "The Man With A Million Friends". He appeared in the movie "Horseman of the Sierras', and hosted the "Range Roundup", TV series in Los Angeles. Deck of Cards was released in February of 1948 and went up the music charts, peaking at #2 in April. Deck of Cards is licensed by BMI #289054.

Another recording was done by Tex Ritter in 1948 and went to #10 in June. Later, in 1959, popular Radio Personality and TV host Wink Martindale released his version of the song, going to #11 on the Country charts in October, 1959. Most recently, Bill Anderson released the song on a CD in June of 1991.