To Hell With Hell 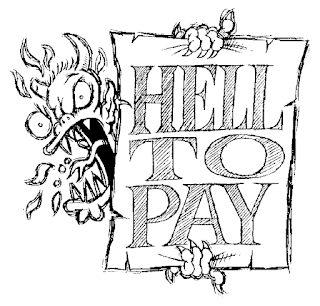 An in-depth look at the biblical concept of hell

Sleep (asleep) is often used as a metaphor for death (die) in Scripture, and Sheol (to ask; bury; to go down; grave; Hades; house; land; pit; sepulchre; tomb) is the destiny of all.

Hell, the place of everlasting punishment (destroy) in darkness (outer; black) and burning in a lake of unquenchable fire, is the final outcome for all those who forfeit life (perish) by their rejection of God. It is a place of torment (gnash; tooth; worm) and separation (fix; gulf).

The Abyss (bottomless) is the abode of demons.

What you see above is the result of my typing the word “hell” into the Study Word portion of my Logos Bible Software program. I did this because I have heard it said the Jesus spoke more about hell than he did heaven. I wanted to see what, if anything, I could find that would show such to be a true statement.

In Christian tradition it is usually associated with the notion of eternal punishment, especially by fire. This idea appears in Isaiah. 66:24, but it is not clearly associated with a place. Jewish writings from the third century B.C. onward, speak of places of punishment by fire for evil spirits and the wicked dead (1 Enoch 18:11-16; 108:3-7, 15; 2 Esdras 7:36-38). The book of Revelation describes a lake that burns with fire and brimstone in which the wicked will be eternally punished (Revelation 19:20; 20:14-15; 21:8).

Easton’s Bible Dictionary goes a little deeper by explaining that the word “Hell” is derived from the Saxon helan, to cover; hence the covered or the invisible place. In Scripture there are three words so rendered:

(1.) Sheol, occurring in the Old Testament sixty-five times. This word Sheol is derived from a root-word meaning “to ask,” “demand;” hence insatiableness (Proverbs 30:15, 16). It is rendered “grave” thirty-one times (Genesis 37:35; 42:38; 44:29, 31; 1 Samuel 2:6, etc.). The Revisers have retained this rendering in the historical books with the original word in the margin, while in the poetical books they have reversed this rule.

The righteous and the wicked are separated. The blessed dead are in that part of Hades called paradise (Luke 23:43). They are also said to be in Abraham’s bosom (Luke 16:22).

The word Gehenna occurs 12 times in the New Testament. Each time it is translated as “hell.”

Consider also the following statements from the book, How to Get Into the Bible: Big Scenes from Revelation.

Punishment for doing wrong is something most people seem to understand and accept. But eternal torture in a lake of burning sulfur is quite another thing—especially if the torturer is God, whom the Bible describes as the essence of love (1 John 4:8).

Part of the problem in understanding what God’s end-time punishment for sinners will be like is that the Bible has to resort to word pictures from the physical world to describe what will take place in an entirely different, spiritual dimension. John says Satan and his followers will be thrown into “a lake of burning sulphur” (19:20) where they will suffer “in pain day and night forever and ever” (20:10, see also 20:15). Jesus confirms that sinners are “in danger of the fires of hell” (Matthew 5:22), a place outside of the kingdom of God where people “cry and grit their teeth in pain” (Matthew 8:12). Surprisingly, Jesus also describes this as a place of darkness (Matthew 8:12). Yet fire displaces darkness.

What exactly is that place of fire and darkness, which the Bible sometimes calls hell? Hell is a word that comes from the Hebrew term Gehenna, an ever-smoldering garbage dump in a valley outside ancient Jerusalem. Here is where people threw their trash, as well as the corpses of executed criminals. The Jews in Jesus’ time used this place as a figure of speech to describe God’s punishment of sinners on Judgment Day.

From beginning to end, the Bible is clear that people have to suffer the consequences of their sinful choices. God honors their decision to reject him, his love, and his rescue from sin and judgment. But how those who reject him will suffer remains in the hands of God who “never does wrong” and “can always be trusted to bring justice” (Deuteronomy 32:4)

Regarding the concept of eternal or everlasting punishment, Adela Y. Collins, Ph.D.; Professor of Biblical Studies; University of Notre Dame; Notre Dame, Indiana has this to say;

The concept that after death an individual can be subjected to ongoing retribution for evil acts committed during life. The idea developed slowly over a long period of time. The ancient Hebrews, like the other Semitic peoples of the ancient Near East, believed that at death the human person lost earthly life but did not go out of existence entirely. They had no notion of an immortal soul separable from the body. Rather, they believed that the dead had a shadowlike or phantomlike existence in the realm of the dead. The realm of the dead was usually located under the earth. It was called by various names, most commonly Sheol. This name is related to the verb ‘to inquire’ in Hebrew and probably reflects the practice of seeking oracles from the dead. In the ot Sheol is not particularly a place of punishment. Existence there is characterized by weariness and forgetfulness.

The notion of eternal punishment does appear a few times in the ot, though not particularly associated with Sheol. In Isa. 66:24 it is said of the wicked that ‘their worm shall not die, their fire shall not be quenched, and they shall be an abhorrence to all flesh’ (rsv). In Daniel 12:2 it is said that some will rise from the dead to shame and everlasting contempt.

In 2 Kings 23:10 the Valley of Hinnom, a ravine south of Jerusalem, is mentioned as a place where children were burned as sacrifices to the god Molech. Perhaps as early as the third century b.c., this valley came to represent the place of eternal punishment (1 Enoch 27; 90:26-27; 2 Esdr. 7:36). This notion appears in the nt, where the valley is called Gehenna (e.g., Matt. 5:22). In Jewish literature of the Greco-Roman period and in the nt, the punishment envisaged in this valley is a fiery one. The book of Revelation does not use the term Gehenna but speaks of a lake of fire in which the wicked will be punished (Rev. 20:14-15).

The notion of eternal punishment was greatly elaborated in the early Christian apocalypses that came to be called apocryphal (to the nt). In The Apocalypse of Peter, for example, various places of punishment are revealed. In each case the mode of punishment suits the sins for which the lost souls are being punished. It is this later tradition that Dante incorporated in his Inferno.

Today there is a range of interpretations of this tradition among Christians. Fundamentalists and some conservative evangelicals believe that hell is an actually existing, physical place and that various horrible physical afflictions will be visited there upon sinners in eternity. A moderate view holds that hell is not a specific place and that God is not preparing physical punishments for the wicked. Hell is rather the state of eternal separation from God. It is the conscious loss of the presence of God and of heavenly bliss. Some liberals understand language about everlasting punishment symbolically. From this point of view, these symbols express something about earthly life, not about an afterlife. Hell may be interpreted as the state in this life of hardened rebellion against God, a state of disobedience beyond forgiveness and redemption. Support for this view is found in the Gospel of John. There the opposite of everlasting punishment, eternal life, is presented primarily as a quality of life in the present: real life, abundant life.

Because of the symbolic nature of the language, some people question whether hell consists of actual fire. Such reasoning should bring no comfort to the lost. The reality is greater than the symbol. The Bible exhausts human language in describing heaven and hell. The former is more glorious, and the latter more terrible, than language can express.