The Writing of the Bible Begins

No one knows when the first Hebrew put pen to parchment, or stylus to clay.

Moses is the first person the Bible identifies as a writer. Perhaps as early as the 1400s B.C. Moses wrote down the many laws God gave him-probably those preserved in the books of Exodus, Leviticus, Numbers, and Deuteronomy (Deuteronomy 31:9). But hundreds of years before Moses, Abraham, the father of the Jewish nation, may have written the dramatic stories about his life that are preserved in Genesis. He came from the Persian Gulf region where writing was already at least 1000 years old.

Most of the rest of the Old Testament-stories, poems, songs, genealogies, nuggets of wisdom, prophecies, and all the other genres of Hebrew tradition were likely passed along orally, then eventually collected and recorded by scribes. The writing probably began in earnest after Israel established itself as a powerful nation, during the reigns of David and Solomon in about 1000 B.C. As scrolls began to wear out, scribes carefully duplicated the text onto fresh scrolls.

Exactly who wrote the Old Testament remains a mystery; most books don't say. The first five books of the Bible, for example, are anonymous. But ancient Jewish tradition says Moses wrote them. Some Bible authors, on the other hand, are clearly identified; many prophets wrote the books named after them.

All but a few sections of the Old Testament are written in Hebrew, the language of the Jews. A few passages are written in Aramaic, a similar language that the Jews picked up when they were exiled to Babylon. After twenty-some-year-old Alexander the Great swept through the Middle East in the early 300s B.C., Greek became the prevailing language.

Within about a century, an Egyptian king decided to create a new holding for his renowned library in Alexandria. As legend has it, he asked the high priest in Jerusalem to loan him about 70 top scholars who would translate the five revered books of Moses into Greek. The result-the first Bible translation-became known as the Septuagint, meaning 70. Over the next hundred years or so, the rest of the Hebrew Bible was added. When New Testament writers later quoted the Old Testament, they quoted it from this Greek translation.

Rome destroyed Jerusalem in A.D. 70, leaving the Jews with no temple for offering animal sacrifices. So the Jews began to offer sacrifices of praise and prayer by reading from their sacred writings. The problem was that the Jews had a wide array of revered books, and many versions of some books. No one knows exactly how or when the Jews settled on the books that make up their TANAKH (Bible), which Christians call the Old Testament. The five books of Moses, known as the TORAH (books of Law), were probably among the first ones widely accepted. The books of the prophets likely came next, followed last by books known as the Writings: Psalms, Proverbs, and others. Eventually eliminated-partly because they were not originally written in Hebrew-were many books published in the popular Greek translation. They were called the Apocrypha, meaning "secondary" or "hidden" works, and would later reappear in Roman Catholic and Eastern Orthodox Bibles.

The Bible isn't one book, but a library of many books. Most Protestant Bibles have 66 books-39 in the Old Testament and 27 in the New-arranged in the order and categories shown here. Old Testament books by prophets, for example, appear together-starting with the Major Prophets (meaning the longer books), followed by the Minor Prophets. This arrangement is different for some other Bible-believing faiths. 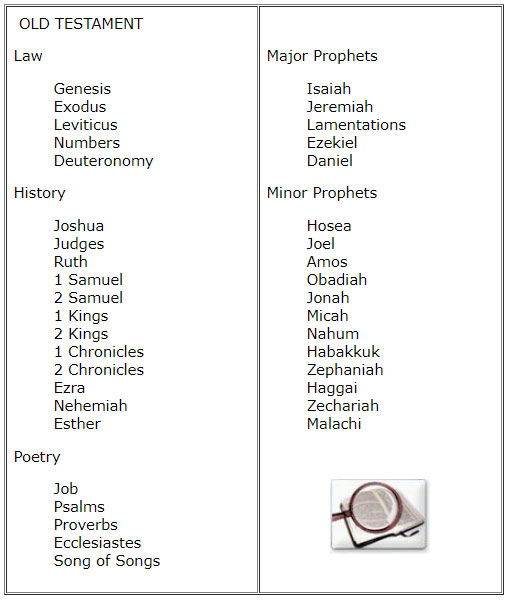 Roman Catholic and Eastern Orthodox Bibles include the Apocrypha, a collection of books that appeared in the Septuagint, a Greek translation made from the Hebrew Bible about 200 years before Christ. Jews, however, later decided against keeping these books in their Bible.
NEXT: The New Testament