How We Got the Bible

There is a short version of how we got the Bible and why...

It is summed up in a letter from the apostle Paul just before his execution:

" All scripture is inspired by God and profitable for teaching, for reproof, for correction, and for training in righteousness" -- 2 Timothy 3:16 (RSV)

Paul was talking about the Tanakh (Jewish Scripture), which Christians refer to as the Old Testament. The Greek Text (New Testament) was not finished at that time. But Christians believe that Paul's words apply equally to the 27 books of the New Testament, which revolve around the life and teachings of God's Son.

Exactly how God "inspired" the many biblical writers is an intriguing mystery, and a source of sometimes-hot debate. But all Christians who believe that the Bible is God's revelation to the human race agree on one rock-solid point: God guided the more than a millennium-long process, from beginning to end. He personally saw to it that humans got the message he wanted to deliver. 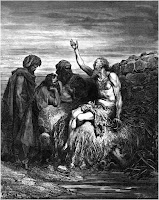 In the beginning, stories about God were probably passed on by word of mouth long before they were written onto clay slabs or tanned sheepskin. In ancient times, villagers and herders alike admired gifted storytellers who, with entertaining flair and evocative cadence, preserved and passed along the community's tradition and history. Listeners became familiar with the stories, and typically refused to allow storytellers to skip or add material-much like children today monitor and supervise the familiar stories that their parents read to them.

The Writing of the Bible Begins

No one knows when the first Hebrew put pen to parchment, or stylus to clay. Moses is the first person the Bible identifies as a writer.

The Good News of the New Testament

The Dangerous Art of Translation

The Danger of Translating the Bible

Parts of the Bible have been translated into about 2,200 languages

Some Sayings from the Bible

Many frequently used sayings come directly from the Bible

Interesting facts about the Bible