The Dangerous Art of Translating the Bible

Translating the Bible Was Risky Business!

Latin, the preferred language of Romans, eventually spread throughout the empire. Christian scholars began producing several Latin translations of the Jewish and Christian Scriptures. By 382 A.D., however, Pope Damasus decided the church needed a single, authoritative Latin translation. He assigned this arduous task to Jerome, leading Bible scholar of the time.

Jerome knew Latin and Greek, but not very much Hebrew. He was determined to translate the Old Testament from the original Hebrew language, not from the Greek Septuagint. So he moved to a monastery in Bethlehem and learned Hebrew from Jewish scholars. More than 20 years after he began, his monumental translation was complete. It became known as the Vulgate, meaning "common," since he wrote it in the common language of the day.

At first, his translation met stiff resistance. After one congregation heard his version of Jonah read to them, instead of worshiping, they rioted. They preferred the earlier version they were used to hearing and memorizing.

Because language changes, updated versions can sometimes sound dramatically different from previous versions. To further complicate the process, it's not always clear how to interpret the ancient text. For example, ancient Hebrew had no vowels and no lowercase letters. If we wrote English that way, "once upon a time" would look like this: NC PN TM. But those same letters could also read "Nice pun, Tom." Ancient readers familiar with the story seemed to have little trouble reading it. Others had to look for context clues, which were plentiful. Solving the puzzle of one word gives you a clue about what the next word should be. When you put a lot of words together it's easier to figure out what the story is about.

As Christianity grew, so did the number of Bible translations. Most Bibles were too expensive for common people, because it took months of work to copy them. In the 1300s a Bible could easily cost a priest a year's salary. This changed dramatically in about 1456, when the Bible was first printed with movable type. By the end of that century, printers were busy in more than 250 European towns, publishing a wide variety of Bible editions.

Surprisingly, Christian church leaders resisted the notion of translating God's Word into everyday language. The prevailing opinion was that people should get their teaching from ministers, not the Bible-because it was thought most people were not capable of traveling through God's Word without a spiritual guide. Oxford scholar John Wycliffe became viewed as a heretic for creating the first English Bible-which was banned in England. He died before anyone killed him, but 43 years later church leaders dug up his remains, burned them, and threw the ashes into a river. 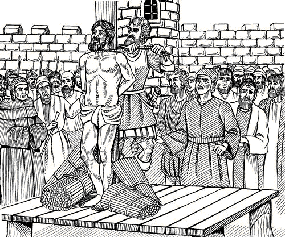 William Tyndale produced an improved English translation in the early 1500s. For this, he was publicly strangled with a rope and his body burned. His dying words were, "Lord, open the King of England's eyes." Within two years the king ordered English Bibles placed in every church.

The most famous English Bible of all time is the King James Version, known in England as the Authorized Version. It remained the principal Bible of English-speaking Protestants for some 300 years, beginning with the time of Shakespeare. In 1611 the translation was presented to King James of England, who had commissioned about 50 of England's foremost scholars to produce it. Working at Oxford, Cambridge, and Westminster, they completed the task in about seven years.

Then, as now, people resisted change. It took 40 years for the public to warm up to this new version and accept it as a replacement for the Geneva Bible, which was translated 50 years earlier and was used by the American Puritans.

Readers today can choose from many Bible translations in modern English. To give you an idea of how they compare-and how they have changed over the centuries-here are excerpts from the 23rd Psalm; the most famous psalm in Scripture, a psalm often quoted in times of difficulty or read at funerals. 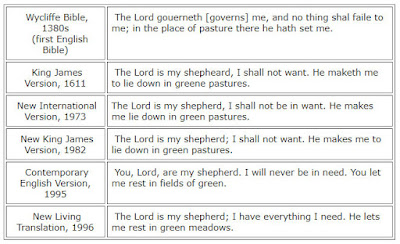 NEXT: The Bible Today