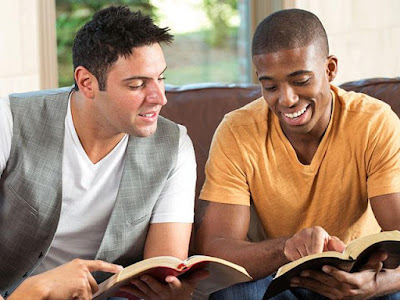 Sharing our faith is a solid, basic, biblical, principle.

A couple of phrases that used to be quite popular in the past were; "Give 'em Hell" and "Keep the Faith."

"Give 'em hell, Harry" was a comment someone yelled out to Harry Truman when he was stumping for the Presidency of the United States. (I know, I'm dating myself, sort of. I wasn't even born then, but the history lesson seemed relevant back when I was in school.)
I'm not sure where "Keep the Faith" originally came from, but I once heard a man by the name of Billy Schneider put a new 'spin' on both of those phrases. At the end of his talk he shouted, "Give 'em Heaven! Give 'em Heaven!" Prior to that he had said something to the effect of, "Don't keep the faith. It's not yours to keep! Share it with others!"
Jesus gave us the same instruction, several times in several different ways, didn't he? The story of the 'ten talents' is a good example. Also consider the times when Jesus healed someone. Several times he would instruct them to go and tell others.
Christ's 'Great Commission' to the disciples was to, "Go and make disciples in all the nations, baptizing them into the name of the Father and of the Son and of the Holy Spirit, and then teach these new disciples to obey all the commands I have given you." (Matthew 28:18-20)
We are to go - whether it is next door or to another country - and make disciples. It is not an option, but a command to all who call Jesus “Lord.” We are not all evangelists in the formal sense, but we have all received gifts that we can use to help fulfill the Great Commission.
In the Old Testament book of 2 Kings, chapter 7, verses 3 - 20 is the story of 4 lepers who realize that they should share the riches of their findings.

"Now there were four men with leprosy sitting at the entrance of the city gates. “Why should we sit here waiting to die?” they asked each other. “We will starve if we stay here, and we will starve if we go back into the city. So we might as well go out and surrender to the Aramean army. If they let us live, so much the better. But if they kill us, we would have died anyway.”
"So that evening they went out to the camp of the Arameans, but no one was there! For the Lord had caused the whole army of Aram to hear the clatter of speeding chariots and the galloping of horses and the sounds of a great army approaching. “The king of Israel has hired the Hittites and Egyptians to attack us!” they cried out. So they panicked and fled into the night, abandoning their tents, horses, donkeys, and everything else, and they fled for their lives.
When the lepers arrived at the edge of the camp, they went into one tent after another, eating, drinking wine, and carrying out silver and gold and clothing and hiding it. Finally, they said to each other, “This is not right. This is wonderful news, and we aren’t sharing it with anyone! If we wait until morning, some terrible calamity will certainly fall upon us. Come on, let’s go back and tell the people at the palace.”
"So they went back to the city and told the gatekeepers what had happened-that they had gone out to the Aramean camp and no one was there! The horses and donkeys were tethered and the tents were all in order, but there was not a single person around. Then the gatekeepers shouted the good news to the people in the palace."

The Good News about Jesus Christ must be shared too, for no news is more important. We must not forget those who are dying without it. We must not become so preoccupied with our own faith that we neglect sharing it with those around us. Our “wonderful news,” like that of the lepers, will not “wait until morning.”
In this "post-modern" world, it is just as important that we share our faith with as many people as will listen, on any given day, at any given time. If we don't, our faith is dead! And how do we best share our faith? Should not every aspect of our life reveal that we have Christ in us? Who will listen and believe us if it is not apparent that we are living a Christ-filled life? If we profess to to others that we have Christ in us, yet continue to live as we always have, driven by our desires for the fruits of this world, we are liars! No wonder people who don't know God are repulsed by so many who say they do.
Christ's step-brother, James, wrote:

"Dear brothers and sisters, what’s the use of saying you have faith if you don’t prove it by your actions? That kind of faith can’t save anyone. Suppose you see a brother or sister who needs food or clothing, and you say, “Well, good-bye and God bless you; stay warm and eat well” - but then you don’t give that person any food or clothing. What good does that do?"
"So you see, it isn’t enough just to have faith. Faith that doesn’t show itself by good deeds is no faith at all - it is dead and useless.
Now someone may argue, “Some people have faith; others have good deeds.” I say, “I can’t see your faith if you don’t have good deeds, but I will show you my faith through my good deeds.”
"Do you still think it’s enough just to believe that there is one God? Well, even the demons believe this, and they tremble in terror! Fool! When will you ever learn that faith that does not result in good deeds is useless? (James 2:14-26)

I urge you, brothers & sisters in Christ, to "Give 'em Heaven!" and to "SHARE Your Faith" with those around you; both in word and in deed. Also keep in mind that it is BY FAITH that you are redeemed from this world and this life - not by what you do or say, but by trusting in the finished work of our Lord Christ Jesus. 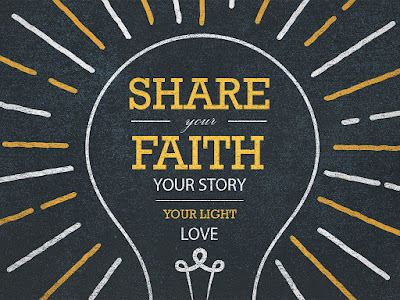