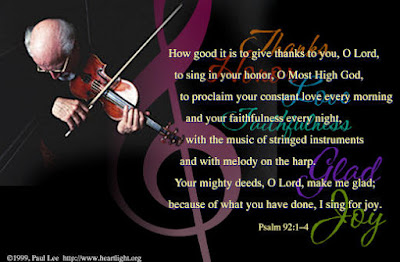 We are called to be holy, as God is holy. We are called to worship in Spirit and Truth. Yet we argue and fight like brute beasts, tearing each other apart; disparaging the name of God in the process.

Recently it was brought to my attention that there is some strong contention among certain "Christians" as regards the use of musical instruments when singing "psalms and hymns and spiritual songs," as noted in Colossians 3:16.
It seems that there are many Christians - both past and present - that have railed loud and long against the use of musical instruments "in church." Some protesters from the past include such well-known figures as John Calvin, John Wesley, and Charles Spurgeon, among others.
But from what I have read thus far, all of those protests are based upon opinion, none of which can cite any solid scriptural basis for their claim. While they do note that there is no mention of musical instruments being used by "Christians" in the Bible, they are unable to show just cause as to why they should not be used.
Warren Wiersbe writes…

When the name of David is mentioned, we usually think of either Goliath or Bathsheba. David did commit a great sin, but he was also a great man of faith whom God used to build the kingdom of Israel. He led the people in overcoming their enemies, expanding their inheritance and, most of all, worshiping their God. He wrote worship songs for the Levites to sing and devised musical instruments for them to play. He spent a lifetime gathering wealth for the building of the temple, and God gave him the plans for the temple so Solomon could do the job. Whether he had in his hand a sling or sword, a harp or hymnal, David was a great servant of God who brought untold blessings to Israel

David was a man after God’s own heart (see 1 Samuel 13:14), and he was (pardon the pun) instrumental in the creation of musical instruments to be used by the Levities. Let us take a look at what happened when they were bringing up the ark to the city of David…

David also commanded the chiefs of the Levites to appoint their brethren as the singers who should play loudly on musical instruments, on harps and lyres and cymbals, to raise sounds of joy. So the Levites appointed Heman the son of Joel; and of his brethren Asaph the son of Berechiah; and of the sons of Merari, their brethren, Ethan the son of Kushaiah; and with them their brethren of the second order, Zechariah, Ja-aziel, Shemiramoth, Jehiel, Unni, Eliab, Benaiah, Ma-aseiah, Mattithiah, Eliphelehu, and Mikneiah, and the gatekeepers Obed-edom and Je-iel. The singers, Heman, Asaph, and Ethan, were to sound bronze cymbals; Zechariah, Azi-el, Shemiramoth, Jehiel, Unni, Eliab, Ma-aseiah, and Benaiah were to play harps according to Alamoth; but Mattithiah, Eliphelehu, Mikneiah, Obed-edom, Je-iel, and Azaziah were to lead with lyres according to the Sheminith. Chenaniah, leader of the Levites in music, should direct the music, for he understood it. Berechiah and Elkanah were to be gatekeepers for the ark. Shebaniah, Joshaphat, Nethanel, Amasai, Zechariah, Benaiah, and Eliezer, the priests, should blow the trumpets before the ark of God. Obed-edom and Jehiah also were to be gatekeepers for the ark.


And as the ark of the covenant of the LORD came to the city of David, Michal the daughter of Saul looked out of the window, and saw King David dancing and making merry; and she despised him in her heart.
1 Chronicles 15:16 through 1 Chronicles 15:29 (RSV)

Someone was killed because David tried to bring up the ark without following God’s instructions, but no one was killed for playing a musical instrument. How sad that so many feel today about those who celebrate God with musical instruments, as David’s wife did about his celebrating God in such a joyful and exuberant manner.
What happened when the people celebrated the completion of the temple?


Then the king and all the people offered sacrifice before the LORD. King Solomon offered as a sacrifice twenty-two thousand oxen and a hundred and twenty thousand sheep. So the king and all the people dedicated the house of God. The priests stood at their posts; the Levites also, with the instruments for music to the LORD which King David had made for giving thanks to the LORD—for his steadfast love endures forever—whenever David offered praises by their ministry; opposite them the priests sounded trumpets; and all Israel stood.
2 Chronicles 7:1 through 2 Chronicles 7:6 (RSV) [emphasis added]

God’s glory filled the temple as – "The priests stood at their posts; the Levites also, with the instruments for music to the LORD which King David had made for giving thanks to the LORD—" These people were giving thanks to their God. They were worshipping and praising Him!
Do you think that if it was wrong for musical instruments to be used, God’s glory would’ve filled the temple?
All this brings to mind some things Paul said in his writings:

Worship isn’t something to be done when those who have been born again assemble together - whether they number two or two hundred. True worship is how we live our life in honor and obedience to the One who gave us that life. -- KD Rhoads