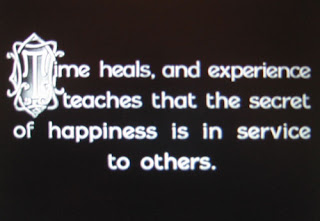 It has taken me sometime to learn the verity of the statement in the image above, but I can and do gladly attest to its veracity.


Of course, there was a time when I would have protested such a statement, claiming that it was merely wishful thinking and something that people say to comfort themselves when in the throes of grief. Yet, God – in His time and in His way – has shown me how mistaken I was for having such a narrow perspective based upon my limited experience and emotional immaturity at the time.


My mother passed away on December 1, 2011 at the age of 88 and not quite 6 months. It wasn’t sudden or unexpected. It was simply the failure of an aged body and mind. Even so, it was a relief and a sorrow. The sorrow came not from her death, but from the unforgiveness that still lingered in my heart. You see, I had been hoping to have worked through all the painful memories of the past prior to the time of her passing.


Today I understand that it was only through her death that all my painful memories could also pass away. Funny how that works – or worked for me, at least.


December 1, 2012 came and went and her passing never came to mind. This year I remembered (on the day) and lit a candle for her in my heart. Today, all is forgiven. Truly forgiven. I wonder why I couldn’t do that while she was alive?

Friday, December 23, 2011 – I miss you, mom. I didn’t think it would be like this. Your advanced age and all had me believing that I was prepared for your passing. Of course, I also thought I had put all our bad times to rest. Yet even as you were nearing your last days, I would still find myself getting upset with you and having those old feelings erupt all over again.


I guess my first clue that I really wasn’t prepared for your passing was the difficulty I had coming to see you in the care center. It was so hard to see you with your infirmities. I tried as best as I was able to accept them, but like yourself, I found them a very hard pill to swallow.


Here it is two days from Christmas and all I can think about is Christmas past; the good ones, when I was a child and you were still healthy and of sound mind. I wonder why I didn’t miss dad like this after he passed away? I guess it was because he kept me at a distance; as I wasn’t really his, even though he adopted me after you two married.


I also remember the bad times; the times when you were sick and would verbally and emotionally abuse and berate me while you were beating me with one of dad’s dress belts. You would say things like, “You don’t know what I went through to have you. I bent over the bed after sex to make sure I had a boy and this is how you act?!? You should be glad I didn’t put you up for adoption like I almost did.”


I didn’t know you were sick when all that was happening. All I could do is wonder, “Why?” Why were you telling me these things and why didn’t you put me up for adoption? And why did you hate me so? I couldn’t understand what had happened, what I had done to make you want to do and say those things to me. Years later, when I would try to talk with you about it, you would say that it never happened and that I was making it all up.


It took me a long time to realize that – from your perspective – that was true. It was true because of what they did to you when you were sick; plus all the barbiturates you took back then in the bad days. Between the drugs and the electro-shock therapy they had given you, your memory failed you. In your mind those events never took place. But I knew otherwise, and it was very bitter medicine to have to accept both realities; the one I endured, the one you forgot.


I tried to forget. I tried to drink and drug those memories from my mind and heart, but I could not. They only magnified and became even more horrid when I thought about them under the influence. It seems that Satan has had a real good time working me over and I can’t understand why. Who am I that he would spend so much time and effort destroying my life like that? I may never know why, but I do know that – as a result – I am emotionally crippled and seemingly incapable of healing. The emotional scars are huge and deep. They frequently itch, and I find myself either scratching at them or trying to improperly soothe them.


I repeatedly try to give them over to God, but I seem incapable, for whatever reason. I wish there was someone (on earth) that I could talk to about this; someone who could help me let go and let God heal my broken heart and spirit. I have tried to talk with certain others about it, but they either don’t seem to grasp (understand) my pain and/or simply don’t have the spiritual wellness (gift?) to get me there.


I hope I don’t die this way. I saw mom facing death with her regrets and unanswered questions and it wasn’t pretty. I don’t want to die full of remorse and sorrow like she seemingly did. I would like to have peace with my past and hope for my future. I believe it is possible; I just don’t know if it is possible for me. I sure can’t seem to get there on my own. It sure would be nice if God would step up and help me heal. Unfortunately, I don’t see that happening any time soon. Perhaps that’s my real problem; lack of faith.

As I said earlier in this post, all those feelings are gone now. God has removed my old unforgiving heart and has given me a new one that I now use in His service.

All glory to God, now and forever more. Amen. 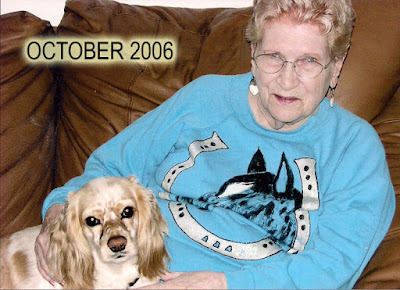