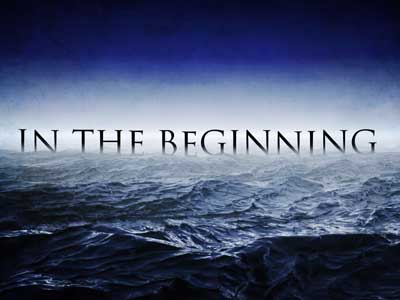 In the beginning was God,
and everything He created was good.
At least, that’s how the story goes.

Unfortunately, one of His “good” creatures went bad and ended up getting kicked out of paradise. Everything has seemingly gone downhill from there, as ‘Adam’ (which is how we translate the Hebrew for 'human' or 'mankind') prophetically goes from bad to worse as we march toward the end of time.
Fortunately, Adam was smart enough to tell his progeny of his misadventures, in the hopes that they might not follow in his footsteps.
Unfortunately, Adam’s progeny said, “Thanks for the heads up!” and found new ways to make the same mistakes.
Fortunately, Adam’s progeny also left a record of their misadventures for future generations to learn from.
Unfortunately, no generation has learned anything from the previous generation, because each generation believes itself to be smarter and wiser than the previous generation – especially since each previous generation was kind enough to leave behind a detailed record of their misadventures, for future generations to learn from.
You would think (at least, I would think) that someone, somewhere along the line, would take the hint and stop repeating the mistakes of the past. But no! We blissfully and blindly march forward without looking at the map left for us by those who have already traveled the road of life that lies before us.
As a very wise man once said,

But then again, nobody pays much attention to wise men these days. Instead, we turn our attention to people who tells us what we want to hear (2 Timothy 4:3-4). Instead of drawing nearer to God, we wander farther and farther from the Truth, as we wade deeper and deeper into the quagmire of all that is false and misleading.
What is the result of our choices? Do we love God with all our heart? Do we love our neighbor as much as we love ourself? No. We only love God as long as he gives us what we want, and we only love our neighbor if and when it is convenient. More often than not, we ridicule and despise our neighbor because they [fill in the blank].

2 Timothy 3:1-9 (RSV) 1 But understand this, that in the last days there will come times of stress. 2For men will be lovers of self, lovers of money, proud, arrogant, abusive, disobedient to their parents, ungrateful, unholy, 3inhuman, implacable, slanderers, profligates, fierce, haters of good, 4treacherous, reckless, swollen with conceit, lovers of pleasure rather than lovers of God, 5holding the form of religion but denying the power of it. Avoid such people. 6For among them are those who make their way into households and capture weak women, burdened with sins and swayed by various impulses, 7who will listen to anybody and can never arrive at a knowledge of the truth. 8As Jannes and Jambres opposed Moses, so these men also oppose the truth, men of corrupt mind and counterfeit faith; 9but they will not get very far, for their folly will be plain to all, as was that of those two men.

The apostle Paul said that teachers of a “counterfeit faith” will not get very far because “their folly will be plain to all”. That might have been true in Paul’s day, but false teachers and their false teaching do not seem to be as “plain” [as obvious] today. Satan is wise. He is the father of lies and appears as an angel of light. (cf. 2 Corinthians 11:14)
More and more lies are getting mixed in with the truth, and people are believing them because they are lazy and make no effort to learn if what is being taught is true or not. Scripture is twisted and distorted so as to fit personal agendas and justify feelings and actions (or inaction) toward others.
Dividing lines are drawn over religious doctrine (teachings) that are either “extra-biblical” and/or “post-biblical”. People go far beyond what is written in the Bible (1 Corinthians 4:6) and read into and/or extract out of the text what is not there. In fact, Bible translations have changed the wording of certain bible verses so as to support erroneous doctrines! Romans 9:5 is a good example of a change made in some Bible translations to support the Triune Godhead (trinity) doctrine – a post-biblical teaching.
And again, this is nothing new, this has been going on for ages. And through the ages are those whom God chooses to bring the people back to the truth.
Unfortunately, the last time God sent someone to tell us the truth, we hated hearing it so much that we labeled him a lunatic and a liar and hung him on a cross.