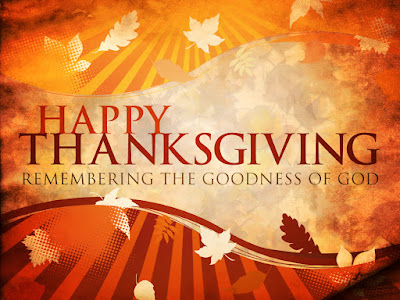 There is always something to be thankful for, even though it may not seem that way when everything is crashing down and our life is coming apart at the seams.

Take what happened to Job, for example...

We often wonder why bad things happen to good people… especially when we are one of the good people that bad things are happening to. We, like Job, may find that learning the answer to that question can be a very humbling experience. Job was wondering what he had done to deserve such a fate. In essence, by asking Job a series of questions that Job was unable to answer, God helped Job to see that he had been wrong to question God (see Job 38-42; key verses 40:1-5).
Instead of asking God why, Job would have done better to continue praising God as he did at first (cf; Job 1:21). Even so, I seriously doubt that you or I would have praised God like Job did when he first learned that the bottom of his world fell out all at once. He was definitely a better man than me. He even refused to take his wife’s suggestion to “curse God and die” (Job 2:9).
It is always easier to identify and complain about everything we feel is not right in our life than it is to identify and praise God for all the goodness in our life and the world we live in. Take, for example, the Israelites after God freed them from their bondage in Egypt. They were constantly fussing about their situation because they were unable to see that they were actually better off than they were before. They were short-sighted and ungrateful. Does that sound familiar? As a parent, I can relate!
God gave the Israelites feasts and festivals to help them remember where they came from and who they had to thank for all the goodness in their lives. Here in America we have set aside days to remember where we came from and who we have to thank for all the goodness in our lives – even when we become short-sighted and forget how good it is to be called children of God (see John 1:12; 11:52; Romans 8:16,21; 9:8; Philippians 2:15; 1 John 3:1,10; 5:2).
Thanksgiving in America is a time when we pause to thank God for His goodness and blessings upon our life. Like Job, we may question God as to why things happen that we cannot make sense of. But also like Job, we do well to consider how great is our God and praise Him for letting us know that we who persevere to the end, will be saved from all that troubles us today. He will wipe every tear from our eyes and all our troubles will be long forgotten. He loves His children so much that He sacrificed His Son to pay the penalty of our sin and thereby restore and renew our relationship with Him – so that we could be with Him in eternity.