Going to Hell in a Handbasket 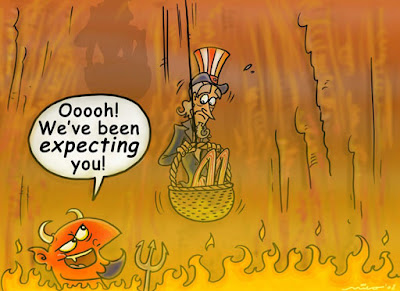 Some people say we’re all in the same boat.
To me, it looks more like a handbasket!

With our modern ability to disseminate information to the masses like never before, comes the ability to influence society as never before. This ability to influence greater numbers of people has resulted in a major shift in the way many Americans formulate their respective attitudes about the world in which we live.
There was a time when people would simply read a newspaper or turn on the radio or television to become informed as to what was taking place in the world around them. “The Media”, as it is commonly referred to today, used to simply report the news as accurately as possible. Americans had grown accustomed to the integrity and honesty with which news agencies based their news-gathering and reporting activities. Someone, somewhere along the line, decided that just reporting the news wasn’t enough; that an effort must be made to garner a larger audience than any other news media outlet. Thus “The Media” began altering the news by employing sensationalism. Honesty and integrity were summarily dismissed in favor of enhancing the news with supposition, innuendo, and political bias. As a result, the collective morale of our nation has been transformed from that of a positive determination to collectively overcome that which was seen as wrong and unjust, to that of encouraging a morbid mixture of animosity, divisiveness, immorality, hatred, and self-centeredness.
This is highly reflective of the historical nation of Israel. Time and again, we see in the Jewish Tanakh (i.e., the Old Testament) the people of Israel turning their collective back on God and what He proclaimed to be good and right, and instead pursued that which gave them pleasure. This was almost always brought about by the influence of the leadership upon the nation. If the King of Israel honored God and sought to uphold Mosaic Law (the laws given to Israel through Moses), then the people followed suit. But if the king was rebellious and worshiped and served other gods, so did the nation.
Since our leadership has determined that God should be removed from the public square, our nation has become weak and ineffective. From the highest positions of government, down through the ranks, we have become infected with a spiritual malady that is tearing us apart from the inside-out. It is like a spiritual cancer eating away at all that is wholesome and good. As a nation we are like the walking dead; putrid, rotting refuse of a once great nation; about to succumb to our own devices.

“To be ‘going to hell in a hand-basket’ is to be rapidly deteriorating – on course for disaster.”

I have no doubt that God will destroy us as He has destroyed every nation that has willfully rebelled against Him (like Sodom and Gomorrah, for example). Of course, a remnant will be saved, as has always been the case…

Isaiah also says about Israel: “Although the descendants of Israel are as numerous as the grains of sand on the seashore, only a few will be saved.
Romans 9:27 (GW)

The United States of America has irreversibly estranged itself from its former glory. And – barring a mighty move of God upon this nation — it will be conquered by a nation of dubious stature; just as God appointed Israel to be conquered by the Assyrians — a nation of people that did not know or honor the God of Israel.

“Then they will hand you over to those who will torture and kill you. All nations will hate you because you are committed to me. Then many will lose faith. They will betray and hate each other. Many false prophets will appear and deceive many people. And because there will be more and more lawlessness, most people’s love will grow cold. But the person who endures to the end will be saved.”
Matthew 24:9-13 (GW)

If you have read this article through, then there is hope for you. For if you cease living solely for yourself and begin striving to live in loving obedience to God’s Spirit of Holiness, you can enter through the narrow gate that leads to eternal life in the kingdom of heaven. Even so, be prepared for the United States to be conquered and ruled by a people who hate your God and consider you an infidel. Be prepared to suffer for your unwavering dedication to God through your faith in His anointed Son, the promised Messiah, Jesus of Nazareth.
RELATED: