God the Son or Son of God 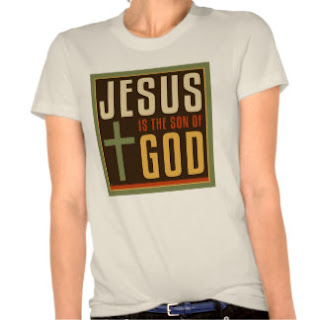 “For there is one God, and there is one mediator between God and men, the man Christ Jesus.” –1 Timothy 2:5 (RSV)

Every religion has a prophet who is pointing people to God. Jesus is the only one who says, “I am God, and I am coming to find you.”

I would like to know where in the Bible Jesus says, “I am God, and I am coming to find you.”
Maybe there is a new Bible out that I’m not familiar with, because the Bible I read quotes Jesus as saying,

John 6:35-40 (RSV) 35 Jesus said to them, “I am the bread of life; he who comes to me shall not hunger, and he who believes in me shall never thirst. 36 But I said to you that you have seen me and yet do not believe. 37 All that the Father gives me will come to me; and him who comes to me I will not cast out. 38 For I have come down from heaven, not to do my own will, but the will of him who sent me;39 and this is the will of him who sent me, that I should lose nothing of all that he has given me, but raise it up at the last day. 40 For this is the will of my Father, that everyone who sees the Son and believes in him should have eternal life; and I will raise him up at the last day.”


John 6:44-51 (RSV) 44 No one can come to me unless the Father who sent me draws him; and I will raise him up at the last day. 45 It is written in the prophets, `And they shall all be taught by God.’ Everyone who has heard and learned from the Father comes to me. 46 Not that any one has seen the Father except him who is from God; he has seen the Father. 47 Truly, truly, I say to you, he who believes has eternal life. 48 I am the bread of life. 49 Your fathers ate the manna in the wilderness, and they died. 50 This is the bread which comes down from heaven, that a man may eat of it and not die. 51 I am the living bread which came down from heaven; if any one eats of this bread, he will live for ever; and the bread which I shall give for the life of the world is my flesh.”

Nowhere in any of that is Jesus claiming to be God. He claims to be the Son of God and that no one can come to him without his Father’s intervention.

Jesus is called “The Son of God” (not God the Son) in all four Gospels:

It is a claim commonly recognized throughout the Gospel accounts:

Matthew 4:3 (RSV) And the tempter came and said to him, “If you are the Son of God, command these stones to become loaves of bread.”


Matthew 4:6 (RSV) …and said to him, “If you are the Son of God, throw yourself down; for it is written, ‘He will give his angels charge of you,’ and ‘On their hands they will bear you up, lest you strike your foot against a stone.'”


Matthew 27:40 (RSV) …and saying, “You who would destroy the temple and build it in three days, save yourself! If you are the Son of God, come down from the cross.”


Matthew 27:54 (RSV) When the centurion and those who were with him, keeping watch over Jesus, saw the earthquake and what took place, they were filled with awe, and said, “Truly this was the Son of God!“


John 20:17 (RSV) Jesus said to her, “Do not hold me, for I have not yet ascended to the Father; but go to my brethren and say to them, I am ascending to my Father and your Father, to my God and your God.“

The “Rock” on which Jesus said he would build his church (Mt 16:18) is the Truth that HE IS THE SON OF GOD. Thus, neither Jesus himself, nor the (unadulterated) Scriptures leave any possible doubt as to the nature of “Jesus of Nazareth”. He is “The SON of God” not “God the Son” as many Trinitarians claim.


Why not accept the record just as it is? Allowing Jesus to be who He is — the SON of God — does not strip him of his deity. We do not need to add to the Scriptures to prove who and what he is. We simply need to “Rightly divide [handle properly] the Truth” (2 Timothy 2:15).