Who Wants To Become A Disciple Of Christ? 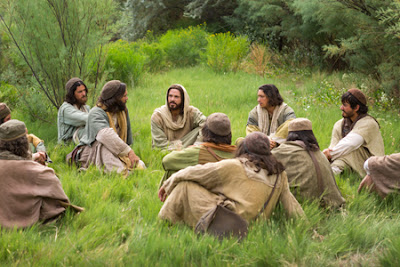 A disciple is called OUT of the world to live IN Christ.

Jesus made it perfectly clear that those who accept His invitation to "Follow Me," need to "Count the Cost" of being His disciple;

Now great multitudes accompanied him; and he turned and said to them, “If any one comes to me and does not hate his own father and mother and wife and children and brothers and sisters, yes, and even his own life, he cannot be my disciple. Whoever does not bear his own cross and come after me, cannot be my disciple. For which of you, desiring to build a tower, does not first sit down and count the cost, whether he has enough to complete it? Otherwise, when he has laid a foundation, and is not able to finish, all who see it begin to mock him, saying, ‘This man began to build, and was not able to finish.’ Or what king, going to encounter another king in war, will not sit down first and take counsel whether he is able with ten thousand to meet him who comes against him with twenty thousand? And if not, while the other is yet a great way off, he sends an embassy and asks terms of peace. So therefore, whoever of you does not renounce all that he has cannot be my disciple.
Luke 14:25-33 (RSV)

Unfortunately, there are many who claim to be "Christian," that have no real understanding of what it truly means to be a follower of Christ;

As they were going along the road, a man said to him, “I will follow you wherever you go.” And Jesus said to him, “Foxes have holes, and birds of the air have nests; but the Son of man has nowhere to lay his head.” To another he said, “Follow me.” But he said, “Lord, let me first go and bury my father.” But he said to him, “Leave the dead to bury their own dead; but as for you, go and proclaim the kingdom of God.” Another said, “I will follow you, Lord; but let me first say farewell to those at my home.” Jesus said to him, “No one who puts his hand to the plow and looks back is fit for the kingdom of God.”
Luke 9:57-62 (RSV)

Many of his disciples, when they heard it, said, “This is a hard saying; who can listen to it?” But Jesus, knowing in himself that his disciples murmured at it, said to them, “Do you take offense at this? Then what if you were to see the Son of man ascending where he was before? It is the spirit that gives life, the flesh is of no avail; the words that I have spoken to you are spirit and life. But there are some of you that do not believe.” For Jesus knew from the first who those were that did not believe, and who it was that would betray him. And he said, “This is why I told you that no one can come to me unless it is granted him by the Father.” After this many of his disciples drew back and no longer went about with him. Jesus said to the twelve, “Do you also wish to go away?” Simon Peter answered him, “Lord, to whom shall we go? You have the words of eternal life; and we have believed, and have come to know, that you are the Holy One of God.”
John 6:60-69 (RSV)

A true disciple of Christ has an unquenchable desire to live entirely for Him;

In the path of thy judgments, O Lord, we wait for thee; thy memorial name is the desire of our soul. My soul yearns for thee in the night, my spirit within me earnestly seeks thee. For when thy judgments are in the earth, the inhabitants of the world learn righteousness.
Isaiah 26:8-9 (RSV)

The heart of a true disciple of Christ is completely devoted to God. Nothing can be hidden from God. He sees and understands everything in our heart. David told Solomon to be completely open with God and dedicated to him;

“And you, Solomon my son, know the God of your father, and serve him with a whole heart and with a willing mind; for the Lord searches all hearts, and understands every plan and thought. If you seek him, he will be found by you; but if you forsake him, he will cast you off for ever.
1 Chronicles 28:9 (RSV)

Additionally, a Christian disciple is devoted to a humble life of servitude;

“Will any one of you, who has a servant plowing or keeping sheep, say to him when he has come in from the field, ‘Come at once and sit down at table’? Will he not rather say to him, ‘Prepare supper for me, and gird yourself and serve me, till I eat and drink; and afterward you shall eat and drink’? Does he thank the servant because he did what was commanded? So you also, when you have done all that is commanded you, say, ‘We are unworthy servants; we have only done what was our duty.’”
Luke 17:7-10 (RSV)

Clearly, many people have yet to understand what it truly means to follow Christ and what type of heart is required to enter the Kingdom of Heaven. Consider the following...

“The kingdom of heaven may be compared to a king who gave a marriage feast for his son, and sent his servants to call those who were invited to the marriage feast; but they would not come. Again he sent other servants, saying, ‘Tell those who are invited, Behold, I have made ready my dinner, my oxen and my fat calves are killed, and everything is ready; come to the marriage feast.’ But they made light of it and went off, one to his farm, another to his business, while the rest seized his servants, treated them shamefully, and killed them. The king was angry, and he sent his troops and destroyed those murderers and burned their city. Then he said to his servants, ‘The wedding is ready, but those invited were not worthy. Go therefore to the thoroughfares, and invite to the marriage feast as many as you find.’ And those servants went out into the streets and gathered all whom they found, both bad and good; so the wedding hall was filled with guests. “But when the king came in to look at the guests, he saw there a man who had no wedding garment; and he said to him, ‘Friend, how did you get in here without a wedding garment?’ And he was speechless. Then the king said to the attendants, ‘Bind him hand and foot, and cast him into the outer darkness; there men will weep and gnash their teeth.’ For many are called, but few are chosen.”
Matthew 22:2-14 (RSV)

Faithfulness: "By this my Father is glorified, that you bear much fruit, and so prove to be my disciples." John 15:8 (RSV)

Perseverance: Jesus then said to the Jews who had believed in him, “If you continue in my word, you are truly my disciples, and you will know the truth, and the truth will make you free.” John 8:31-32 (RSV)

Love: "By this all men will know that you are my disciples, if you have love for one another.” John 13:35 (RSV)

Humility: "A disciple is not above his teacher, nor a servant above his master; it is enough for the disciple to be like his teacher, and the servant like his master. If they have called the master of the house Beelzebul [‘the prince of demons’], how much more will they malign those of his household." Matthew 10:24-25 (RSV)

Surrender of all: "If any one comes to me and does not hate his own father and mother and wife and children and brothers and sisters, yes, and even his own life, he cannot be my disciple. So therefore, whoever of you does not renounce all that he has cannot be my disciple." Luke 14:26,33 (RSV) [cf. Luke 18:29-30]

Bearing the cross: Then Jesus told his disciples, “If any man would come after me, let him deny himself and take up his cross and follow me. For whoever would save his life will lose it, and whoever loses his life for my sake will find it." Matthew 16:24-25 (RSV)

Do you have an intimate, personal relationship with Christ? Is your relationship with Christ the most important relationship of your life? Would you like it to be? Would you like to be so close to Christ that you can hear His heart beat? Would you like to be able to declare the name of Jesus as easily and with as much confidence as you do your own name?
If you said yes to one or more of the preceding questions, then I invite you to start right now and prayerfully ask Jesus to examine your heart and show you how to completely, and without any hesitation, set aside your own agenda and your own desires and allow Him to fill your heart and your life with His presence, passion and power.