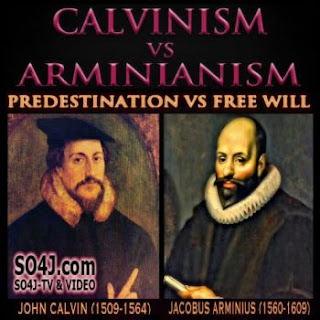 For a long time, the basis of “Calvinism” has repeatedly given me pause to consider, “What say, if any, do I have in my salvation?”

It is my understanding (and I could very well be mistaken — and I’m sure that if I am there will be at least one person willing to step forward to realign my understanding) that “Calvinism” is based upon the tenet that no one has the freedom to accept or reject God’s offer of salvation through faith in Christ (irresistible grace).
Today this tenet was once again brought to my attention by a link to an article by C.H. Spurgeon, entitled, A Defense of Calvinism. I found myself agreeing whole-heartedly with Mr. Spurgeon’s account of his heart prior to his salvation…

“Looking back on my past life, I can see that the dawning of it all was of God; of God effectively. I took no torch with which to light the sun, but the sun enlightened me. I did not commence my spiritual life—no, I rather kicked, and struggled against the things of the Spirit: when He drew me, for a time I did not run after Him: there was a natural hatred in my soul of everything holy and good. Wooing was lost upon me—warnings were cast to the wind—thunders were despised; and as for the whispers of His love, they were rejected as being less than nothing and vanity.”

When I began to learn of God, I was in kindergarten. What I was taught made perfect sense to me and I readily accepted it. In fact, to me, it really was “Good News” to learn that such was the case! I was glad to learn that there was a loving God looking out for me and everyone on earth. It answered a lot of questions and gave me a sense of peace and security. Of course, as I grew older, the simplicity of God was lost.
The more I learned, the more of life that I experienced, the more lost and confused I became. Finally, at age 16, I was so lost, confused and angry that I made a very serious and sincere attempt to leave this earth so that I might speak with God in person. When that failed, I made the decision to reject all that I had been told and taught about God and to live life as I saw fit. So for the next 30 years I did and felt exactly as Charles said he did (see quote above).
“Many are invited, but few are chosen.” –Matthew 22:14 (NIV)
Where Charles and I differ is in how we see our salvation. According to the full account Charles gives in his Defense of Calvinism, he does not see salvation as being a response to the wooing, warnings, thunders, and whispers of God’s love. Instead, Charles says that we are saved simply and only because God decided long ago whom (among the called) he would choose. Charles believes this, even though he makes such statements as, “When I was coming to Christ,” and “It was He who turned my heart, and brought me down on my knees before Him” (emphasis mine).
Charles says, and I agree whole-heartedly, that “no Christian man will ever say that faith came of itself without the gift and without the working of the Holy Spirit.” Indeed, the Scriptures tell us many times and in many ways that no one seeks God of their own volition. Rather, God makes himself known to each of us frequently and in many different ways. He does so in such a way that no one, in their hearts of hearts, can deny the who and the how, of the truth that has entered therein. As the Apostle Paul says,

“The wrath of God is being revealed from heaven against all the godlessness and wickedness of men who suppress the truth by their wickedness, since what may be known about God is plain to them, because God has made it plain to them. For since the creation of the world God’s invisible qualities—his eternal power and divine nature—have been clearly seen, being understood from what has been made, so that men are without excuse.” –Romans 1:18-20 (NIV)

Why would mankind even need an excuse if it is God who determines who will and will not be saved? An even better question is, why do the Scriptures admonish everyone to repent of their iniquity if God has already determined the outcome? Why does Jesus repeatedly say, “To those who overcome, I will give…”? What is to overcome? If I have no choice in the matter, then what am I overcoming and to what purpose? According to Calvinism, the decision has already been made! What is the point of my existence if I am not one of the elect?
If we have no choice in the matter, then why did God send His Son to die on the cross? Why does God bother with all the wooing and warning and thundering and whispering if it is not to elicit a response from us? Why do we need the Bible to tell us about God’s desire for us if He has already decided who He is going to keep and who He is going to throw away? Why did Christ tell His disciples that “No one may come unto the Father but through me,” and then instruct them to tell all the nations? According to Calvinism the decision has been made! Wouldn’t it be a moot point?
What was the point of all the parables Jesus taught? Most importantly, what is the purpose of judgment day if we never had any choice to accept or reject the Truth that God has made known to us?
YES, I AGREE… NO ONE WOULD BE SAVED WERE IT NOT FOR THE GRACE OF GOD… BUT DO WE NOT HAVE THE OPTION TO ACCEPT OR REJECT HIS OFFER OF SALVATION AND RECONCILIATION THROUGH FAITH IN CHRIST?

“Once you were alienated from God and were enemies in your minds because of your evil behavior. But now he has reconciled you by Christ’s physical body through death to present you holy in his sight, without blemish and free from accusation — if you continue in your faith, established and firm, not moved from the hope held out in the gospel. This is the gospel that you heard and that has been proclaimed to every creature under heaven, and of which I, Paul, have become a servant.” –Colossians 1:21-23 (NIV)

How can we 'turn to God' if we have no choice in the matter? God made the law so that we might know what sin is. God fulfilled His covenant with mankind through Christ Jesus. If we have no freedom of choice, there would be no need for us to know what sin is and thus no need for redemption from it. If we have no choice to believe or not, then Christ's sacrifice was unnecessary!
Through whom was everything created, and by whom is everything held together? Who wrote the Bible? Who laid His life down for you? In whom do you place your faith? Which ones are from earth and see only partially? Which one comes from heaven and knows all; John Calvin, Charles Spurgeon, or Jesus Christ?

FINAL THOUGHT: Even Jesus called for people to repent (Mark 1:14-15). Why call and invite people to turn from their wickedness and toward God if we have no choice in the matter?